Research and Development of Company-Related IT Norms, in BA-Language (BAL Business Analyst Language)

Two large-scale projects were at the starting point for Company-Related IT Norms, which lead to the new Business Analyst Language (BAL). The first large-scale project was the multiple data valuation system, developed by ODZ for the MGB Migros cooperative association beginning in 1975, which ran for 30 years without manual programming in a fully user oriented fashion until 2004.

The second large-scale project was intended for the Swiss Center for Rationalisation in Construction (CRB) beginning in 1990 (SVB Swiss Builders’ Association). ODZ shaped the development of Construction-Related Norms (NPK).

In April 2009, the Swiss Federal Office for Professional Education and Technology awarded ODZ an innovation voucher. Followed by a close collaboration with the Institute for Applied Information Technology (InIT) of the ZHAW (Zurich University of Applied Sciences), Professor Dr. Sc. Techn. Ing. Eduard Mumprecht. During this period, the participants of this project demonstrated in various investigations the theoretical feasibility of BAL: regardless of a process applications’ complexity, BAL’s zero code software eliminates realization / programming (coding) phases, single, as well as chain tests.

All industries have begun to use their potential for rationalization several decades ago, for example, the construction industry with NPK. Now, within the limits of an SME, ODZ investigates similar solutions for the IT industry.

Shortly followed by the preparation of the EUROSTARS PROPOSAL BA-Language for Brussels. In this context, we emphasise the outstanding collaboration with Dr. Reinhold Thurner, developer of Delta and Metasafe:

In August 2012, ODZ and SparXsystems together handed in the proposal BA-Language No. 7644 Eurostar in Brussels:

The proposal passed all first 3 evaluation phases. However, Brussel requires more partners and a greater support from universities.

Ever since, ODZ seeks collaboration with other software houses and universities to further develop BAL.

In case of any interest, please do not hesitate to contact ODZ AG Mr. Willi Zweidler: willi.zweidler@odz.ch.

According to the following diagram of phases, the ODZ phase model, the conventional approach is trimmed by business management positions. The white surfaces, the phases realization / programming as well as single and chain tests, are no longer required. 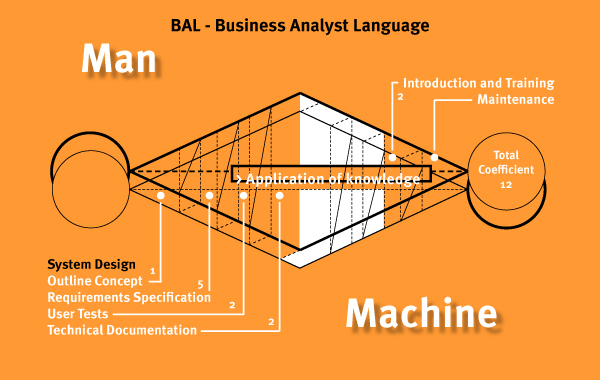 IT Norms result in a higher level of abstraction, that is to say, BAL.

This higher level of abstraction in ODZ phases, defined by Company-Related IT Norms, shifts “programming” to the phase “Requirements Specifications” (business analysis). The following technical programming, which had earlier been handled manually, is now handled by machine. By these means, because of the business-related IT Norm Positions, everything related to business analysis is defined not by the use of models, but even more exactly, down to the finest detail. This shift closes the semantic gap under the conventional approach.